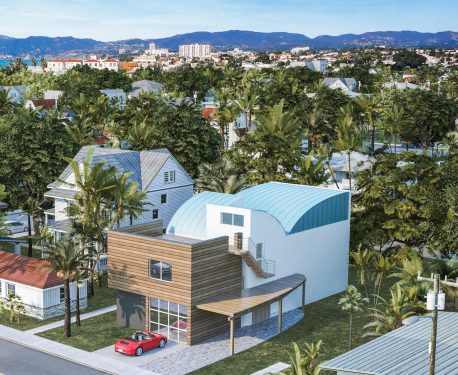 The 661 Vernon Annex was a proposed 1,800 SF Studio and Master Bedroom annex to an existing 1,356 SF four bedroom former rental house on a 4,802 SF lot at 661 Vernon Avenue in the Oakwood section of Venice, CA, designed by Glenn Erikson, PhD, AIA.

The existing house was purchased in 1990 and this artist studio annex (i.e. a separate, accessory building) designed in 1991. The Annex was designed both as a working studio and as a “couples” unit, including a large family living area, but with children’s bedrooms and play areas in the existing house, thus separate from the Annex. Due to a zoning code that prohibited two kitchens on one lot, and given Erikson’s and and his wife (video and performance artist) Axel Forrester’s desire to keep a kitchen in the existing house, the Annex was designed so it’s studio darkroom could double as a kitchen. Zoning also required an enclosed garage, even though many neighborhood residents parked on the street. Therefor, the Annex’s garage was to be fully finished, with a single panel, fully glazed overhead door to meet code requirements. Being close to the water, the concept was to metaphorically express the Venice Beach area with forms suggestive of waves and surfing. 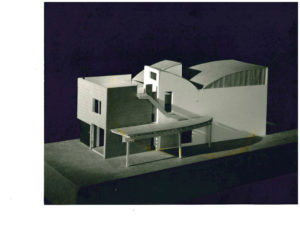 Unfortunately, real estate values dropped precipitously and construction loans became unavailable due to the Savings and Loan crises, thus this project had to be abandoned.