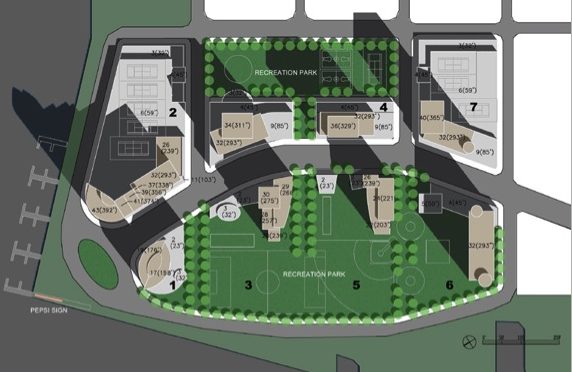 Time Equities, Inc. with FXFowle Architects responded to a Request For Proposals (RFP) from the Queens West Development Corporation.  Glenn Erikson oversaw the design team for during the proposal process. Design options were limited by QWDC’s requirement for both an early start to buildout and its prior URLEP approval of a street system that resulted in a less than optimal design, and which had not yet been built out.

Our proposal consolidated the number of buildings down to seven, allowing a large increase in open space and community services, a larger proportion of units with water views, and an enhanced urban retail street experience as compared to the original design. The Proposed solution was to maintain for Phase One the URLEP approved street grid, density and overall design approach, and to apply for an updated URLEP, which could reasonably be expected to be approved by the beginning of Phase Two (each phase being a block square area of the total project).

This allowed the proposed project to both be started quite quickly, yet provide for all the enhancements the design team envisaged. These enhancements included: