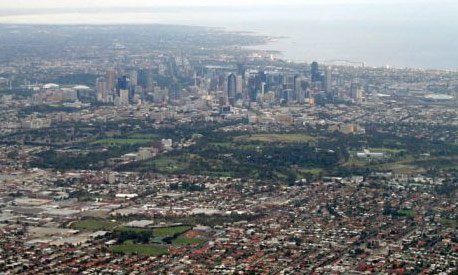 History is littered with civilizations whose cities suffered ecological collapses, from the Fertile Crescent to the Indus Valley to the Mayans, Anasazi, and many, many others. As we enter the Anthropocene, we must learn from their mistakes and correct our own civilization’s similar trajectory of inadequate responses to overpopulation, resource extraction, climatic changes, mass extinctions, and more.

Ecological balance. Cities that have existed for centuries, or even millennia, owe their survival to reaching a sustainable balance with their local ecologies. Those that did not meet the challenge ultimately collapsed. Most cities today are significantly out of balance with their environments, given the last 300 years of continuous growth and industrialization. Rebalancing our urban areas with their regional ecologies will require extensive analysis of ecosystems, sustainable energy production, sufficient water supplies, ecologically safe waste recycling, environmentally sustainable materials sourcing, and maintenance of appropriate population levels.

Global warming. For the past 1.8 million years the earth’s glacial-interglacial, or Ice Age, cycles have stayed relatively consistent. Based on the historical lengths of these cycles, the earth would now be beginning to transition into a new Ice Age had we not intervened with man-made warming. Our greenhouse gas production since the beginning of the Industrial Revolution, however, is more than enough to prevent a new Ice Age. If we wish to resume production that creates unnaturally high levels of greenhouse gases at some point in the future, for now we must halt greenhouse gas emissions, affordably recycle an appropriate quantity of these gases out of the atmosphere, and conserve petrochemical resources.

Planning for rising oceans. Oceans and seas have maintained near-constant levels throughout recorded history, despite considerable variation over geologic time. Due to global warming they will now rise substantially (10-30 feet is probable, while 100+ feet is possible) during this century, flooding many coastal areas. Over 3 billion people now reside in areas less than 33 feet above current sea levels. With planning, some negative impacts can at least be minimized for urban populations. Densely built-up areas should plan for sea walls, berms, and the fortification of harbors with floodgates; other urban communities should direct growth to areas with higher elevations and use earthmovers to fill in low-lying areas they wish to save. Where possible, low-lying populated areas can be completely converted to estuaries and parkland, while settlements can be rebuilt elsewhere. If none of these are viable options, some areas will simply need to be abandoned.

Mass extinction. The past 200 years have seen a surge in global population, resulting in a tremendous expansion of agricultural fields and grazing ranges, the over-harvesting of game and fish, the extensive loss of natural habitat, widespread pollution, the degradation of ecosystems, and the worldwide spread of invasive species. In the last 20 years alone we have lost 10 percent of the planet’s wilderness areas. This perfect storm has resulted in global mass extinction and diminished biodiversity. To reduce the rate of extinction, we need to preserve as much of the natural landscape as we can by halting deforestation, slowing population growth and transferring some of that growth from rural to urban areas, lowering demand for animal food sources, more efficiently utilizing agricultural lands, and minimizing the use of pesticides.

Delays to renewable energy transformation.  The extent of existing urban petroleum infrastructure in developed countries, together with high debt loads in dozens of poorer countries, is delaying a transition to a global renewable energy infrastructure. This process can be accelerated by first adopting conservation measures and funding smaller start-up projects to reduce governments’ institutional energy costs, thereby freeing up financial resources for the transition. Next, large infrastructure projects with all-inclusive financing should undergo competitive bidding processes.

Sprawl vs. urban growth. Sprawl occurs primarily where national subsidies and local zoning codes encourage, or even enforce, this pattern of infrastructure development. Sprawl eats up valuable resources, fractures and destroys important ecosystems, and increases pollution and jobs/housing imbalances. Viable solutions to managing projected growth do exist, from revitalizing and expanding existing downtowns to creating new cities. Between these two extremes are many options. Suburban and urban pockets can be transformed into new urban centers by increasing access to mass transit, through such means as expanded highways, light rail transit, dedicated bus lanes, or (in the near future) dedicated lanes for autonomous vehicles. Urbanizing these outlying areas can enhance diversity and density within a broader urban region without increasing the overall footprint on the surrounding landscape.

New urbanism and edge cities. These relatively new forms of urban development, typified by the Walt Disney Corporation’s Celebration town in Florida and the unincorporated edge city Tyson’s Corner in Virginia, are centers of increased density in the sea of suburbia. However, as privately owned and managed entities, they also tend toward exclusionary practices and lack income equality, job and housing balance, and urban vitality. They also lack public commons and adequate citizen involvement. Thus, there is a need to open these areas up to the public, increase diversity and density, and connect them to the rest of the city with mass transit.

Water supply and quality. In many urban areas, growth has outpaced available water supplies, climate change will exacerbate this problem as rainfall drops in the coming decades.  In some areas, water will need to be re-priced to minimize waste, with a sustenance supply provided at low cost for all residents but high costs imposed for additional usage. Other areas will require substantial planning for and infrastructure investments in water recycling or desalination. Where contamination is a problem, “upriver” water supplies will need to be protected from agricultural fertilizers or animal waste.

Regional agriculture and food supplies. Farmers have always selected desirable traits in plants used in agriculture. More recent genetic engineering has been accompanied by an ever-growing use of herbicides, while “superweeds” have developed resistance and ecologically deficient crop management methods have become more common. Many herbicides are harmful to humans, even in small amounts, and as use increases, so does their danger. Urban governments can support further research in enhanced farming systems and crop breeding programs that are not dependent on herbicides. Food labeling laws should be developed and enforced to inform consumers when known cancer agents—such as herbicides, pesticides, growth hormones, or other additives—are used during food production.

Food dumping vs. emergency relief. When international agencies provide food on a regular basis to poor countries, instead of only when emergency relief is needed, they create a post-colonial dependency as local farmers unable to sell their goods become dependent on food aid themselves. International funds should instead be directed to developing local agriculture.

Wasteful agricultural methods. Agricultural systems need to be transformed to reduce waste and feed the world population more efficiently and effectively. For example, corn subsidized and grown for ethanol in the U.S. keeps corn prices artificially high, and prevents agricultural lands from being used for food production. Global food markets can also produce waste—palm trees grown in the less developed world for consumption primarily in the developed world withholds agricultural lands from production of local food supplies. In the developing world, city governments should work with national governments to disincentivize agricultural export at the expense of meeting domestic food needs.

Design methodology. Ancient cities grew incrementally, and in the process respected and worked with natural landforms. However, as the combination of gridded city plans and 20th-century suburbia have extended urban sprawl, the natural topography has too often been treated as an obstacle to be overcome instead of an enhancement to planning and design. While autocratic design solutions overwhelm naturally occurring formations and contribute to a sense of sameness and disconnectedness, emerging urban design should take cues from native ecologies and natural terrains.

The street and the sidewalk. Before 1900, cities were generally designed for walking. Buildings presented appropriate street fronts lined with stoops, balconies, retail shops, and human-scaled entrances. Pedestrians could safely walk in the street as horse-drawn carriages and trolleys moved at a slow pace. The automobile industry lobbied for 30 mph speeds on city streets, which forever changed the streets’ pedestrian character. Zoning has also insulated residential structures from downtown retail and employment, requiring setbacks and parking standards that further deadened streets, especially those in downtown areas in the evenings, which then invited crime. We need to revitalize our streets and sidewalks by increasing the diversity and density of pedestrian-friendly uses.

The failure to create an ecological planning and architectural movement. We have not yet fully developed an architecture that minimizes environmental destruction, in spite of good intentions, many fine individual projects, and LEED and Passive Building certifications. Institutional clients, developers, design educators, architectural publications, and design competitions should require that designs resonate with the regional environment. Ideally, each building should be a self-sustaining, living member of the ecology in which it is set. City building departments can assist in this endeavor by requiring architects to certify that their buildings meet LEED and/or Passive Building standards.

The above strategies can pull developed economies away from trends that lead to a potential ecological abyss, as well as provide a path for both developed and developing countries toward a sustainable and equitable future.