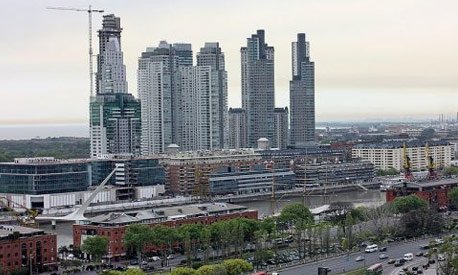 Given today’s concerns regarding global warming, mass extinctions, and income inequality, we must address the underlying economic facets of these challenges to our urban fabric.  Following the foundations put forward in the lead article, “Strategizing Urban Policies for the Anthropocene,” this analysis will help form strategies for sustainable cities that provide enhanced qualities of life for all citizens.

Economic sustainability.  Large global firms cannot be relied on to create and maintain long-term, high-paying, and life-fulfilling jobs. Instead, they too frequently buy out and absorb smaller firms, then export and/or cut jobs in their pursuit of low labor costs, minimized taxes, and increased short-term profits. On the other hand, regional institutional organizations and industrial firms that are tied to local natural resources tend to utilize long-term economic planning, which helps to stabilize communities, while local entrepreneurial firms employing native competitive advantages create a large share of job and income growth for most urban areas. Individual urban economies must subsequently work closely with regional firms and nurture, promote, and incentivize local entrepreneurs.

Present levels of income inequality and poverty are unsustainable. Present rates of growth on capital and high-income earnings together with low tax rates on high incomes and inheritances have resulted in immense wealth gains among the world’s top 1 percent. The worldwide wealth of the richest 1 percent now equals that of the remaining 99 percent. In addition to this stark level of inequality, there is also tremendous poverty, and hundreds of millions of people live in slum conditions.

Both inequality and poverty appear to be as great now as at any time in the past. Income inequality historically courses between peaks and troughs with wars, revolutions, and periods of high taxation creating the troughs. While we lack exact statistics, it appears that revolutions have historically occurred when income inequality reaches levels approximating those of today. To solve these issues, our urban areas should pursue the following policies: first, encourage entrepreneurs who create both jobs and new wealth; second, equalize educational opportunities between the poor and the wealthy; third, distribute low-income housing equally throughout the city to increase education and job opportunities for lower-income families; fourth, curtail public projects that benefit only the wealthy; fifth, encourage a society of authenticity, culture and work/life balance; and sixth, appropriately adjust tax policies that favor the wealthy.

World hunger is a function of poverty, not food production. The world is currently producing enough food to feed today’s population. However, the world’s poor do not have sufficient financial resources to overcome the causes of their lack of food. The most important factors are the use of a substantial amount of these food resources for the production of meat, food waste in its production, transportation and storage, over-consumption or obesity, and international food and agricultural aid policies.  While all of these factors can be addressed at the urban level through an appropriate combination of education, regulation, and taxation, cities can also work with organizations to better produce food in their urban environments—be they on rooftops, empty lots, or brownfields.

Present levels of resource extraction are unsustainable. The earth’s resources are being extracted, consumed, and disposed at immense scales. Phosphorus, oil and natural gas, copper, zinc, aluminum, and iron are all non-renewal resources with known available reserves that will likely be economically depleted during the 21st century. Even if new sources or economic alternatives are found, sustainability demands that we conserve. Use of all such materials should be husbanded, and they should be recycled to the extent possible.

Trading economies. Trading has always been a major attribute to a society’s sustainability, as resources, skills, and industries present in the local economy are traded for goods available from other societies. Each region’s trading economy should be developed and supported so it is of long-term value to other regions, and of a nature and supply that is sustainable into the future

Regionalism. Authentic regional distinctions and their associated cultural identities provide residents with an important element of self-concept and contribute to a sense of belonging to a distinct and identifiable community. They also assist tourism and trade and attract individuals and firms with needed skills, jobs, and capital by offering a variety of cultural amenities. Unfortunately, other mediums work to dilute these distinctions and identities, including global media, retail franchising, and many examples of post-modern architecture. This dilution of regional identity works against the interests of a region’s tourism, trade and residents’ quality of life. An authentic regionalism should be encouraged and promoted.

Global finance and small business. Both the financial meltdown of 2007-08 and the Dodd-Frank response to it in the U.S. created a global financial system more attuned to large corporations than to smaller, entrepreneurial firms, which decreased both the formation and growth rates of small businesses. This in turn has had an impact on economic growth, especially in the U.S. Cities should not only encourage local and regional banks to make more small business loans available, but also encourage crowd-funding through incentives and other forms of financial support.

The Collaborative Commons. Historically, public ownership of and access to important Collaborative Commons, including but not limited to utilities, roads, waterways, schools, parks, entertainment, and cultural venues, has been considered a given. However, in today’s context, the Collaborative Commons also includes the internet, higher education, and basic health care. Where available, many of these Commons are now under threat of corporate ownership and thus profit-maximizing fees, or of being crowded out for funding due to mega-projects that are unresponsive to most citizens’ needs, such as Brazil’s 2016 Olympic village, which displaced thousands in its creation. Instead, societies should husband and improve these common amenities and resources and at low economic cost for all citizens, especially those who wish to opt out of developing and maintaining high per-capita incomes.

In effect, use of the Collaborative Commons can provide citizens with meaningful alternative pathways to the sacrifices of long hours and unsatisfying jobs too often necessary to acquire high-income jobs and attain wealth and access to education. And as the internet can provide the means for those in the developing world to vastly increase their quality of life as well as income levels, aid to these countries’ urban areas should be directed toward providing dependable, free and fast service.

Quality of life vs. economic enhancement. Historically, quality of life is associated with a sufficiency in food and necessary material goods together with engagement in a worthwhile activity, whether intellectual, religious, or familial. Enlightenment philosophies promoted a belief that scientific progress would increase societies’ overall quality of life through industrial and economic gains. However, two world wars, nuclear weapons, industrial pollution, and global warming tell us that the link is less direct. There is a need to refocus on the ethics of our current economy and what it is that truly enhances quality of life among a society’s participant. Planning and design should follow this focus.

One aspect of this refocusing and rebalancing is that large numbers of individuals would likely prefer to adjust their work/life balance to less work and less income, especially if there are significant Collaborative Commons available for their lifestyle. The coming era of automation and artificial intelligence may well cause this shift to be necessary. It will require urban governments to find ways to provide sufficient amenities free or at low cost, such as internet access, transportation, parks, health care, art and entertainment venues, exercise and sports options, plus other opportunities for socialization and engagement.

Revitalization vs. gentrification. From the beginning of urban renewal, planners have worked to re-envision and rebuild slums. The result too often has been displacement of the urban poor, whether through gentrification or the bulldozers of “economic development.” The revitalization of Harlem in the 1990s and early 2000s demonstrated that well-designed revitalization efforts, which included programs for small business and job creation, along with low-income housing targeted at local residents, can improve neighborhoods both physically and economically, while keeping the vast majority of residents in place.

Economic realignment. Significant societal realignments have occurred over the past 600 years as new economic regimes have replaced previous ones: from feudalism to colonialism to the present regime of global corporate capitalism. We now appear to be entering the latest realignment: an economy defined by robot assembly, artificial intelligence, zero marginal costs of production, and a sharing economy. We need to encourage the positive aspects of these changes and prepare our urban areas for realignment, which will include a significant increase in the turnover of wealth, thus reducing, at least temporarily, income inequality. This entrepreneurial spirit and the interconnectivity it will bring should be encouraged, but with checks and balances regarding privacy, freedom of access, and the potential for heightened income inequality.

Creative destruction. Economic realignment is just one aspect of the force of creative destruction. This is an engine for societal progress and income redistribution as entrenched economic interests falter while new, smaller, more creative and nimble entrepreneurial firms flourish and create jobs. Over 50 percent of the Fortune 500 companies have been delisted since 2000, and the new digital economy accounts for most of the new companies listed. Unfortunately, politicians and bureaucracies tend to assist and promote entrenched economic interests instead of newer entrepreneurs. The cities that sustainably embrace such creative destruction will be the cities of the future.

Time value of money vs. sustainability. The fundamental dogma of the time value of money is that today’s funds are worth more than tomorrow’s. This creates several problems. The first is that this value concept is clearly not consistent with long-term inter-generational sustainability. Second, most non-renewable resources will have a higher relative value to future generations than they have today for a profit-seeking corporation. Third, for-profit corporations seeking to maximize shareholder wealth are intrinsically set up to reject sustainable projects that only provide fair profits in the long run. As a society, we need to reconsider the appropriateness of corporate ownership of valuable non-renewable resources and find fair ways to convert these resources to public and/or non-profit ownership.

Integrating these economic strategies will enhance the sustainability and resiliency of our cities, lessen income inequality, and reduce poverty, and together with the following strategies for an urban ecology, political regimes, and cultural life, will lead to a higher quality of life for all urban citizens.

While free market forces will force corrective responses to many of our challenges, the tipping points for these corrections may come too late for many of society’s least economically resourceful members, with potentially dire consequences for all of society.